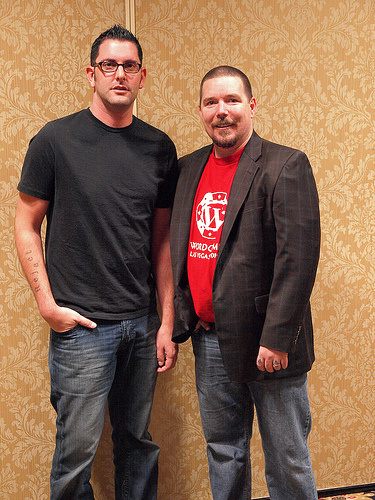 As promised, but a little late I know - the first post in my series "My WordPress Friends" is here. For those that don't know, I'm going to be posting weekly (hopefully) about all of my WordPress friends. The posts are not going to be long, so don't be looking for a novel - just some information

As luck would have it, I am not able to attend WordCamp San Francisco this year. I have two tickets for Saturday only. The event is sold out, so if you want these tickets they're easy to get. Just make a donation to the WordPress Foundation ($20 per ticket) and forward me your receipt for the

So it's pretty obvious I don't blog as much as I probably should, but this is my site so whatever, right?! Anyway, to get things sort of caught up, I've been busy. 9seeds has been busy, thus the lack of posting...just working going on here. But this weekend I'll be at WordCamp Phoenix and thought

So I haven't posted in quite a while and need to catch up. It was a super busy fall this year and the month of October I was barely home at all. It started with WordCamp Detroit on October 8th. This was Detroit's first WordCamp and it was great. The organization and varying topics that were

So, I'm on the road again...this time I'll be traveling to California for WordCamp San Francisco on May 1st. I'm excited about this event, as it's the "end all be all" of WordCamps, and I've never been to this one before. I look forward to seeing a lot of familiar faces and meeting a lot of new

So, this past weekend I attended and spoke at WordCamp Boston, and 9seeds also sponsored the event. First, let me say what a great event it was. It was held at the Microsoft New England Research and Development (NERD) Center and wow...what a place! They did not hold back when designing and

So here it is...new site, new blog. I thought for a while about importing all my posts over to this new site, but I just decided to start it fresh 100%! So, with that I'll do a short wrap-up of what happened this past year and we'll go from there. January 2009, I go to Las Vegas for WordCamp