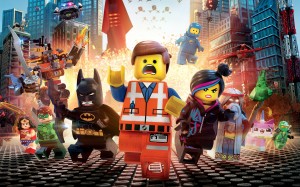 Our household does not have cable TV and commercials are a thing of the past around here, so I really had no expectations going into the theater this past weekend to see The Lego Movie. I had heard some buzz around it and that the movie was great, but I had no idea what it was about except that it had to do with Lego.

The story is one that’s been told before but this was different. A normal guy doing normal work and just going about his life with no hopes of anything more. He then stumbles upon a “relic” which attaches to him and leads him to find out he’s “The Special” according to ancient prophesy. He’s told he’s the most interesting, important person in the world because of this but he can’t see why. He then finds out that the relic is the only thing that can stop the bad guy “Lord Business” from destroying the world with the “Kragle”.

I’m enjoying the movie because it’s really funny and the references are great but all the while I’m thinking to myself “what is Kragle and how can this relic (just a piece of plastic) stop it?”. Lots of characters appear throughout the movie including Batman, Superman, The Green Lantern and some Star Wars icons just to name a few and the humor is great.

Fast forward and bit and we find out that “Kragle” is actually a tube of Krazy Glue with some of the letters scratched off! Seriously, the references made throughout the movie are brilliant and hilarious. Lord Business wants to spray the Kragle on the entire world so everything will be stuck in time according to how he wants things, he’s a bit controlling. The relic ends up being the lid for the Krazy Glue which would obviously save the world because as you know when you put that lid on it’s never coming off!

Everything works out in the end and it’s a great movie. You’ll need to see it for yourself as this is not meant to be a full review of the movie but a takeaway from my perspective.

Toward the end of the movie it flashes to real life and there is a boy in the basement playing with legos (which is actually what the entire movie is based around). He’s setup the characters to fight against Lord Business and his Kragle because the basement is filled with lego sculptures created by his dad. The dad is gluing everything together so things are “just right” and will not be able to be messed up. The dad is Lord Business of course.

That really hit home for me when I saw that. The entire movie is from the perspective of a kid just wanting to play and have fun but fight against the powers that be which are trying to keep a controlled environment. As a parent this really sunk in pretty hard. We can get caught up in our day-to-day and trying to keep everything perfect that we sometimes forget the little ones don’t see things that way and just want to have fun.

I will be working on changing how I see things from now on and try to look at the world through the eyes of my kiddos and I’m guessing when I do I’ll see that all the things I worry so much about are really just not that big of a deal. Do me a favor and put down your Kragle and try to do the same!